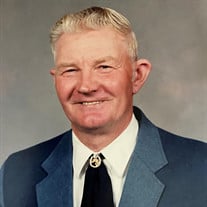 Funeral Service for Orlan E. Pellatz, age 84 of Neligh, NE will be 10:30 a.m. Saturday, July 10, 2021 at Brunswick Community Church in Brunswick, NE with Pastor John Kringle, Officiating. Burial will be at the West Willowdale Cemetery, Brunswick, NE with Military Rites by Neligh Legion Post #172 and VFW #5287. Visitation will be from 5:00 to 7:00 p.m. July 9, 2021 at the Brunswick Community Church in Brunswick. Orlan passed away July 5, 2021 at Arbor Care Center in Neligh, NE. Beyer Snider Memorial Funeral Home in Neligh is handling the arrangements. Condolences may be directed to the family at www.beyersnidermemorialfh.com Orlan Edward Pellatz son, of Rudie and Alta (Snodgrass) Pellatz was born on September 2, 1936 at Brunswick, NE. He attended country school Dist.#27 and graduated from Neligh High School in 1954. All during high school he was active in the FFA program and received the State Farmer Degree Award in April 1954. He enlisted in the National Guard on April 25, 1959 at Fort Leonard Wood, MO. His qualifications were marksman (Rifle) and specialty of a cook. He received Honorable Discharge December 29, 1964 as a certified staff Sergeant Company B 134th Infantry, He spent several summers, two week camps, as a cook of Fort Ripley, MN with the National Guard from Norfolk, NE. He spent the majority of his life on the farm that he purchased from his granddad, (Ed Pellatz) with farming and raising hogs. On April 4, 1969, he married Leola Mae Jensen at Brunswick, NE and they resided on his farm south of Brunswick. There were two sons born to this union Edward Alan Pellatz and Dale Orlan Pellatz. In 2010, the farm had been in the Pellatz family for 100 years. He was a life time member of the Brunswick Community Church, serving as Sunday School Treasure for many years. Then was on the Brunswick Community Church Board as a member, chairman, and elder for 40 years. He also served on Dist. #4 rural school board for 30 years. Survived by his wife, Leola Pellatz in Neligh, NE. Sons, Edward (Ed) and wife, Jennifer Pellatz of Neligh, NE and Dale and wife, Carla Pellatz of Grimes, IA. Six grandchildren: Samantha Pellatz of Yellowstone Park, WY; Courtney (Cordell) Waterbury of Elgin, NE; Heather Pellatz (Taven Cameron) of Neligh, NE; Hali Pellatz and fiancé, Jake Tharaldson of Adel, IA; Christian Pellatz of Kearney, NE; and Preston Pellatz of Grimes, IA. Two great grandsons, Matthew Edward Cameron of Neligh, NE and Riley Tyler Tharaldson of Adel, IA. Two brothers, Warren (Janette) Pellatz of Brunswick, NE and Larry Pellatz, of Neligh, NE. Many nieces, nephews, cousins, and friends. Preceded in death by his parents and sister-in-law, Barbara Pellatz.

The family of Orlan Edward Pellatz created this Life Tributes page to make it easy to share your memories.