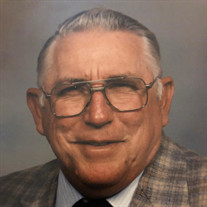 Funeral services for Orval E. Hankla age 93, of Clearwater, NE will be at 10:30 a.m. Saturday, December 14, 2019 at Concordia Lutheran Church in Clearwater with Pastor Daniel Feusse officiating. Burial will be in Clearwater Cemetery with Military Rites conducted by Clearwater American Legion Post #267, and Sons of the Legion, and Legion Riders. Visitation will be from 5:00 - 7:00 p.m., Friday, December 13, 2019, at Snider Memorial Funeral Home in Clearwater. Orval passed away Monday, December 9, 2019, at Arbor Care Center in Neligh. Orval Elton Hankla was born on April 13, 1926, to Walter and Blanche (Guynn) Hankla at Closter, Nebraska. He graduated in 1943 from Brunswick High School. He enlisted in the United States Army on August 28, 1944, at Ft. Leavenworth, KS, and was discharged on June 26, 1946. On June 12, 1950, he was united in marriage to Delores Eilers. They celebrated 66 years of marriage before her death in 2016. Orval worked for Contois Motor Company for 15 years. He then took over the repair part of the business which became Orval’s Auto Service in 1962. He was baptized and confirmed as a member of Concordia Lutheran Church in Clearwater. He was a member of Clearwater American Legion Post #267. and he also served on the Clearwater Village Board. Orval enjoyed fishing and camping with his family, especially at Merritt Reservoir. He is survived by his children: Kathleen (Peter) Pryjmak of Greensburg, PA; Steven (Linda) Hankla of Clearwater, NE; Clarice Hynes of Crawford, NE; Mark Hankla of Lincoln, NE; Lynn (Joseph) Pelster of Omaha, NE; and Brian (Mary) of King George, VA, 13 grandchildren, 18 great-grandchildren. He was preceded in death by his parents, wife, son-in-law, John Hynes, four brothers, and six sisters.

Funeral services for Orval E. Hankla age 93, of Clearwater, NE will be at 10:30 a.m. Saturday, December 14, 2019 at Concordia Lutheran Church in Clearwater with Pastor Daniel Feusse officiating. Burial will be in Clearwater Cemetery with Military... View Obituary & Service Information

The family of Orval Elton Hankla created this Life Tributes page to make it easy to share your memories.

Send flowers to the Hankla family.