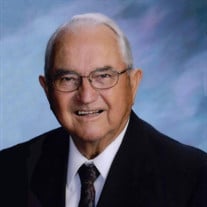 Funeral services for Patrick J. McLain, age 87 of Ewing, NE will be 10:30 a.m. Saturday, November 20, 2021 at St. John’s Catholic Church at rural Ewing, NE with Father John Norman, officiating. Burial will be at St. Anthony’s Catholic Cemetery with Military Honors Sanders American Legion Post #214 and Legion Riders. Visitation will be 5:00 to 7:00 p.m. Friday, November 19. 2021 at St. John’s Catholic Church with wake service at 7:00 with Father James Kramper. Pat Passed away on November 16, 2021 in Omaha, NE. Snider Memorial Funeral Home is handling the arrangements. Condolences may be directed to the family at www.snidermemorialfh.com Patrick Jules McLain was born on August 7, 1934 in Spalding, Ne to Arthur and Wilhemina (Bernt) McLain. He would ride his horse to school at Bartlett and he graduated from Wheeler County High School. On August 27, 1953, he enlisted in the United States Army and was a Korean War Vet who spent time overseas during this time and was discharged from Fort Sheridan Illinois, on August 12, 1955. When he came home, he married his high school sweetheart Janice Bartak on December 27, 1955. They eventually settled on Janice parents ranch and worked with Adolph until they acquired their own land and cattle where he farmed for many years and milked cows for 55 years. Dad continued to help with any task around the farm until his health declined and he wasn’t able. He enjoyed hunting coyotes, fishing, antiquing, and doing his bargain shopping. He also enjoyed going to garage sales, farm sales, and cattle sales where he could visit with people. He was a rare combination of someone who had a love of farm life, family, and understanding what was important and the simplicity of living a life with those you love. He is survived by his wife, Janice, of almost 66 years. Daughters: Micki and husband, Jeff Wright of Ewing, NE and Jacki and husband, Tony Fiamengo of San Pedro, CA. Sons: Dan and wife, Janet McLain of Ewing, NE and Gary McLain of Kansas City, MO. 11 grandkids and 17 great grandkids. Sister, Judy Ita and sister-in-law and husband Shirley and Rich Sunderman. Preceded in death by his parents, and his brothers: Dick, Don, Charles and sister Marjorie Johnson.

The family of Patrick Jules McLain created this Life Tributes page to make it easy to share your memories.

Send flowers to the McLain family.