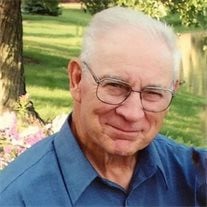 A Mass of Christian burial for Robert M. Spieker age 94 of Neligh, Ne will be held at 10:30 a.m. on Wednesday, April 11, 2018 at the St. Francis Catholic Church in Neligh, NE with Father Christopher Onuoha, officiating. Burial will be at St. Boniface Catholic Cemetery in Elgin, NE with Military Rites conducted by Neligh American Legion Post #172 and VFW #5287. Visitation will be Tuesday, April 10, 2018 5:00 to 7:00 p.m. at St. Francis Catholic Church with Wake Service at 7:00 p.m. He passed away on Saturday, April 7, 2018 at Neligh Care and Rehabilitation Center in Neligh, NE. Beyer Snider Memorial Funeral Home of Neligh, NE is handling the arrangements. In lieu of flowers memorial may be directed to Neligh Care and Rehabilitation Center in Neligh. Condolences may be directed to the family at www.beyersnidermemorialfh.com Robert Matthew Spieker, son of Fred and Louise (Friedman) Spieker, was born January 22, 1924 in Petersburg, NE. Robert was baptized and confirmed in St John's Catholic Church in Petersburg. NE. He grew up and helped on the family farm North of Petersburg, NE until he went to the Army in 1944. He was assigned to the 152nd Infantry Company D and transferred to Guam and Leyte Island in Philippine Island, 315 Bomb Wing of 20th Air Force D29 Air Craft MP Company and assigned Military Police Deputy. On September 15, 1953 he married Laura Mae Sehi at St John's Church in rural Clearwater, NE. They celebrated their 64th anniversary last fall. To this union, eleven children were born: Carol Anderson, Karen Eischeid, James Spieker, Annette Spieker, Jannelle Risinger, Vera Sullivan, Cary Spieker, Lynette Faltin, Roberta "Bobbi" Kennedy, Connie Snyder, and Terri Spieker. When first married, they lived on a farm near Park Center area west of Elgin and farmed south of Elgin for several years. They moved to a farm near Brunswick, NE in 1963 and still farm to this present day. Robert was a lifelong member of the Catholic Church. He enjoyed farming the land, raising pigs or cattle and raising all those children along with his bride, Laura Mae. When he was not farming, he enjoyed fishing and camping in South Dakota, and the last 20+ years he enjoyed winters in Laughlin, NV. Robert is best known for his love of laughter as he had many 'stories and jokes' that will be long remembered. He often had that smile on his face and would start laughing before he told the punch line. He was a kind and gentle soul that will be forever missed but he left his legacy of faith and family. Robert is survived by his wife Laura Mae of Neligh, NE, ten children and their spouses: Carol Anderson of Neligh, NE, Karen Eischeid of Elgin, NE, James (Renee) Spieker of Madison, NE, Jannelle (Mark) Risinger of Norfolk, NE, Vera (Mark) Sullivan of Columbus, NE, Cary (Kim) Spieker of Norfolk, NE, Lynette (Gary) Faltin of Dodge, NE, Roberta "Bobbi" Kennedy of Petersburg, NE, Connie (Brad) Snyder of Holstein, IA, and Terri Spieker of Olathe, KS. He has 30 grandchildren and 17 great grandchildren. He also has two surviving siblings: Melinda Buelt of Elgin, NE and Fred Spieker of Albion, NE along with many nieces, nephews, relatives and friends. Robert was preceded in death by his infant daughter, Annette Spieker; parents Fred and Louise (Friedman) Spieker; siblings Rosamond Klein, Florence Luettel, Agatha Richard, Mae Moser, Linus Spieker, Leroy Spieker, Lawrence Spieker, Cletus Spieker; son-in law Paul Eischeid.

A Mass of Christian burial for Robert M. Spieker age 94 of Neligh, Ne will be held at 10:30 a.m. on Wednesday, April 11, 2018 at the St. Francis Catholic Church in Neligh, NE with Father Christopher Onuoha, officiating. Burial will be at St.... View Obituary & Service Information

The family of Robert Matthew Spieker created this Life Tributes page to make it easy to share your memories.

A Mass of Christian burial for Robert M. Spieker age 94 of Neligh,...

Send flowers to the Spieker family.