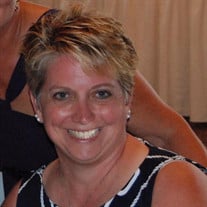 Robin Gayl (Martin) Boschult, 54, passed away peacefully on Divine Mercy Sunday night, April 19, 2020 in the comfort of her home. She was surrounded by love with her two children, Dara and Addison, holding her hands and hugging her close. Robin was born August 20, 1965 to Harold Eugene and Rose Marie (Harness) Martin. She graduated from Neligh High School in 1983 and Wayne State College in 1988, with a degree in interior design. Robin also spent a year in Sands Point as a nanny for a dear family. In 1989, she was married to Derald Linn Boschult. They settled in Omaha and had two children, Dara Nicole and Addison Martin Boschult. After her children were older she started working as a paraprofessional educator for special needs children at Ralston Public Schools. The family moved to Neligh in 2013. Robin was employed by Morrison Farms for several years and was then hired as a paraprofessional educator for ESU #8 and later at Neligh Public Schools. Robin had a quirky sense of humor, which was recognized by most of the children. They loved her and she loved them. Robin enjoyed going to auctions, crafting, and making things. She had ideas for everything. She had many plans and projects left to complete on her home as well. She enjoyed attending church at St. Francis and on Wednesday nights you would find her at the bowling alley, where she was the club’s president. Her greatest accomplishment was becoming, “GaGa” to her grandson Jeter August. Early 2018, she was diagnosed with stage four colon cancer. Beating the odds, she fought a long and hard fight and ultimately won her fight against cancer. Robin is survived by her spouse, Derald, her beautiful children, Dara (Jake) Janowski and Addison Boschult, grandson Jeter Janowski, her parents, brother Kent (Angie) Martin, sister Wendy (Doug) Bolling, mother in law, Shirley Boschult, brother in law, Daniel Boschult, nieces and nephew, many great nieces and nephews, and special friend, Jon Hladovcak. Robin was preceded in death by grandparents Harold and Susan Martin and father in law, Herald Boschult. She will be missed by family and friends who touched her life. A memorial service and rosary will be held at a later date at St Francis in Neligh, due to the present healthcare precautions. Beyer Snider Memorial Funeral Home is assisting the family with arrangements. Robin’s wishes for memorial donations were to be directed towards the New Moon Theatre renovation project. She also wanted to spread a message of kindness and making sure we act upon it because this world needs kindness more than anything.

Robin Gayl (Martin) Boschult, 54, passed away peacefully on Divine Mercy Sunday night, April 19, 2020 in the comfort of her home. She was surrounded by love with her two children, Dara and Addison, holding her hands and hugging her close. Robin... View Obituary & Service Information

The family of Robin Gayl Boschult created this Life Tributes page to make it easy to share your memories.

Send flowers to the Boschult family.