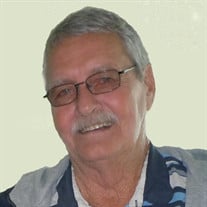 Funeral service for Ronald Wilkinson age 81 of Oakdale, NE will be 10:30 a.m. Thursday, October 29, 2020 at Elgin United Methodist Church with Pastor Brian Loy, officiating . Visitation will be 5:00 p.m. to 7:00 p.m. Wednesday, October 28, 2020 at Beyer Snider Memorial Funeral Home in Neligh, NE. Burial will be at Oakdale Cemetery. CDC guidelines will be followed and masks to be worn at visitation and funeral service. Ron passed away on Sunday, October 25, 2020surrounded by family at Antelope Memorial Hospital in Neligh, NE.  Beyer Snider Memorial Funeral Home is handling the arrangements.  Condolences may be directed to the family at www.beyersnidermemorialfh.com Ron was born August 10, 1939, at home on a farm west of Elgin, the son of Irl and Irma (Schmidt) Wilkinson. He attended school in the Elgin area, quitting before his graduation to help on the family farm after his father lost his arm to a harvesting accident. The family moved to town in 1955, at which time Ron ran an egg and cream route for Farmer’s Co-op. He later went to work for Miller Seed. He was a salesman for Ritz Craft Trailer Factory, Purina Feed and he was a car salesman for the Ford dealership in Elgin. Even as a young man Ron loved fast cars and motorcycles. He belonged to the Traveleer’s Motorcycle Club, participating in hill climbs and scrambles on a track south of Oakdale. People far and wide knew Ron from his 25+ years of racing stock cars and his pink #8 car and later the stars and stripes #8 car. He raced tracks in Norfolk, Albion, Creighton, Clearwater, Niobrara and some in Stuart. He raced alongside four of his cousins; Bud, Dean, Gary and Little Ron, notably, “the Wilkinson Team”. At one time Ron was known to have 600+ trophies in his winning collection. On December 28, 1959, Ron married Janice Potter. To this marriage four children were born. They later divorced. Ron started and ran a stump grinding business for four or five years until he had covered most of the area from Elgin to Norfolk. In June of 1975 he married Mary Stelling of Orchard. They resided in Norfolk where they started a custom combining business. His crew, which at that time also included his son Larry, started each year in Texas and worked their way back to Nebraska. Ron and Mary then relocated to Oakdale in about 1980, where they started a custom hay grinding business, M & R Grinding. They later divorced and Ron ran the hay grinding business until his retirement. In the spring of 1997, Ron met a very loving and caring woman, Donna, who would come to be his life partner and was with him to the very end. Ron had a love of competition and hated to lose. Whether it be motorcycle rallies (33 years in Sturgis), stock car racing, snowmobile racing, antique tractor pulling, classic car shows, he loved to WIN! He earned and held a pilot license back in the day, and also tried out and qualified for NASCAR, but failed to pass his eye exam. He at one time was also an avid coyote hunter. Over the past few years he loved weekends spent camping with Donna and other friends. He loved afternoon coffee at the local coffee shop. Those who knew Ron Wilkinson, know that he knew how to LIVE life! There are so many more adventures and stories than can be listed here and are now memories to cherish forever! Big Ron was known by many, loved by most, and will be remembered by all! It has been said for years that Ron never met a stranger and probably knew at least one person in every town in Nebraska. Ron found his faith in God and loved his church and church family. He loved his many grandchildren, as they did him. He is survived by his life partner Donna Vice; children, Larry Wilkinson (Cheryl) of Neligh; Connie (John) Sharples of Fullerton and Krista (Jeremy) Freeman of Norfolk; 7 grandchildren, 14 great- grandchildren; brothers Dale Wilkinson and late wife Joyce; Lynn (Pat) Wilkinson of Neligh; sister Rose Ann (Pat) Cool of Columbus; sister-in-law, Lorri Wilkinson of Chapman. He was preceded in death by his daughter, Linda; infant granddaughter Leslie Jo Hess, grandson, Tyson Freeman, his parents and brother Vance Wilkinson.

The family of Ronald Ray Wilkinson created this Life Tributes page to make it easy to share your memories.

Funeral service for Ronald Wilkinson age 81 of Oakdale, NE will...

Send flowers to the Wilkinson family.