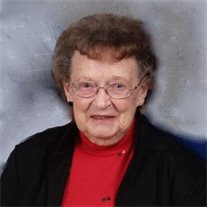 Funeral Services for Ruth "Darlene" Gibbs age 89 of Kearney, NE were at 10:30 a.m. Wednesday, November 15, 2017 at United Methodist Church in Neligh, NE with Pastor Bruce Phillips, Officiating. Music was provided by Jerome and Janet Porter. Visitation was 6:00 to 8:00 p.m. Tuesday, November 14, 2017 at Beyer Snider Memorial Funeral Home in Neligh. Burial was in Orchard Hills Cemetery in Orchard, NE at 1:00 p.m. Pallbearers were Gary Caskey, Doug Porter, Leland Caskey, Carl Buskirk, Jeff Kerkman, and Chad Kaup. Honorary Pallbearers were Jan Curtis, Marvin Haswell, Lanny Billings, and Galan Gibbs. Beyer Snider Memorial Funeral Home in Neligh is handling the arrangements. Darlene passed away Saturday, November 11, 2017 at Kearney, Ne. Condolences may be directed to the family at www.beyersnidermemorialfh.com Ruth Darlene (Porter) Gibbs was born on May 22, 1928 to Edwin and Minnie (Brookhouser) Porter on a farm northwest of Page, NE.  At the age of two, she moved with her parents and family to the Porter farm homestead northwest of Orchard, NE.  She attended Rural School District #68 for eight years and graduated from Orchard High School in 1946.  She attended Wayne State College and then taught school for four years.  On December 27, 1950 she married Verlyn Gibbs of Orchard.  To this union were born two sons, Randy and Terry.  Darlene worked in the Neligh Bank and Citizen State Band for a number of years.  In 1971 they purchased a clothing store and moved to Neligh.  After the death of her husband in 1976, Darlene continued running the store and hotel until selling the business in 1980.  She did various secretarial work until starting work in the Antelope County Court House in 1984.  She continued to work there until 2002 at which time she retired.  She enjoyed her kids, gardening, dancing, and traveling to see kids.  She was a member of Legion Auxiliary in Neligh, ladies Extension Clubs, Fair Board, and volunteered at Neligh School Library.  She was member of Orchard and Neligh United Methodist Church. She is survived by her sons; Randy and Kathie Gibbs of Columbia, MO and Terry and Deb Gibbs of Kearney, NE, grandchildren; Melony Kinter and Willie, Daniel Gibbs and Bert, Dana Morhain and Mason, and Chris Gibbs, great grandchildren; Kylie and Ashley Kinter,  Sister-in-law; Bernice Porter, and several nieces and nephews. She was preceded in death by parents, husband, and siblings; Bill, Mary, Stan, and Lloyd.

The family of Ruth "Darlene" Gibbs created this Life Tributes page to make it easy to share your memories.

Send flowers to the Gibbs family.