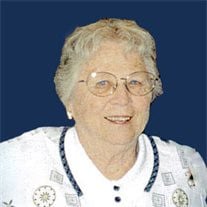 Funeral Services for Ruthe N. Hansen age 90 of Neligh, NE were 1:00 p.m., Monday, December 30, 2013 at Beyer Snider Memorial Funeral Home in Neligh, Ne with Pastor Gary Main, Officiating. Music was provided by Steve Johnson and Natalie Bitney. Burial was in Laurel Hill Cemetery in Neligh, NE. Pallbearers were Kevin Bitney, Christopher Bitney, Daniel Hansen, Steve Johnson, Bruce Ofe, and Mark Miller. Ruthe passed away on Thursday, December 26, 2013 at Golden Living Center in Neligh, Ne. Ruthe Norene Hansen was born on April 24, 1923 in Tilden, Ne to Earl and Aura (Olin) Wagner. She was raised in the Bunker Hill area south of Tilden, Ne and graduated from Tilden High School. After graduating from high school she worked at the National Bank of Neligh. She married Merlin Hansen on August 21, 1944 at O'Neill, Ne. After Merlin returned from WWII, they started farming south of Norfolk. Ne. They farmed at that location for three years and then moved to a farm south of Oakdale, Ne, where they farmed for 7 years. They then moved to the farm north of Neligh, Ne where they resided until she passed away. Ruthe and Merlin celebrated 69 years of marriage. Ruthe worked at the Antelope Memorial Hospital for a number of years, but her main career and her focus was helping her husband on the farm and raising her family. Her main interests included reading books and the activities of her grandkids and great grandkids. She is survived by her husband, Merlin, and 2 children, Nancy Bitney of Neligh, Ne and Larry Hansen of Norfolk, Ne.; 4 grandchildren, Kevin (Heidi) Bitney, Christopher (Natalie) Bitney, Tracy Hansen and Daniel (Kristal) Hansen; 8 great grandchildren, Gracie Bitney, Chloe Bitney, Gracie Bullock, Layne Bullock, Baylee Johnson, Sydney Johnson, Brynlee Hansen, and Ayla Hansen . She was preceded in death by her parents and a brother, Merle Wagner. .

The family of Ruthe Norene Hansen created this Life Tributes page to make it easy to share your memories.

Send flowers to the Hansen family.