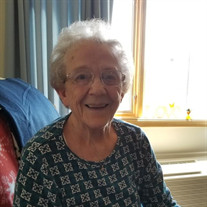 A funeral Mass for Sharon A. Ward age 82 of Ewing will be held Friday March 25, 2022 at 10:30 a.m. at St. Peter’s Catholic Church in Ewing, NE. Burial will be in the St. Peters Catholic Cemetery. Visitation will be Thursday March 24, 2022 from 5:00 to 7:00 at St. Peter’s Catholic Church in Ewing with Wake service at 7:00 p.m. Sharon passed away on Thursday March 17th at Heritage of Bel Air in Norfolk Nebraska. Snider Memorial Funeral Home is handling the arrangements. Condolences maybe directed to the family at www.snidermemorialfh.com   Sharon was born in Ewing on June 25, 1939 the tenth of 11 children to Roy and Ann (Bauer) Rotherham. Starting at a young age Sharon along with her siblings worked at the Green Lantern Café in Ewing which was owned by her family. Sharon attended Ewing Public School graduating in 1957.  Following graduation Sharon moved to California where she worked for a gas company and where she met Gary Ward whom she married in 1959; they had 7 children together Vicki, Shelly, Debbie, Wendy, Terri, Jim and Mary.   The family lived in Kansas and Nebraska before moving to Simi Valley California in 1976 where she was employed as a manager at McDonalds for 20 years. In 1998, Sharon and her husband “retired” and moved to Ewing where she was active with the St. Peter’s Christian Mothers, American Legion Auxiliary and taught CCD to elementary students. In 2000, Sharon and her husband purchased the Two Rivers Motel in Ewing which she operated until she officially retired in 2015.   Sharon loved spending time with her family especially her grandchildren and great grandchildren. She enjoyed playing board games and cards but her favorite “pastime” was going to The Hill to play the slot machines.   Sharon was preceded in death by her husband Gary, her parents, 9 siblings Pat, Michael, Jim, Betty, Donna, Vince, Jerry, Bernadine and Geraldine her granddaughter Amanda Gillespie and great grandson Gary Ward Jr.  She is survived by her brother Butch (Carol) Rotherham of Ewing, NE brother-in-law Leo O’Malley of North Platte NE; sisters-in-laws Marge Rotherham of Crawford, NE and Karen Rotherham of Ewing, NE. Her children: Vicki (Craig) Bollwitt of Ewing, Shelly Gillespie of Ewing, Debbie (Allan) Bentley of Neligh, Wendy Moscrop (Jon Foster) of LaQuinta California, Terri Ward of Yukon Oklahoma, Jim (Darleen) Ward of Simi Valley California and Mary Reilly of Denver Colorado in addition to several grandchildren, great grandchildren, nieces and nephews.

The family of Sharon A. Ward created this Life Tributes page to make it easy to share your memories.

A funeral Mass for Sharon A. Ward age 82 of Ewing will be held...

Send flowers to the Ward family.