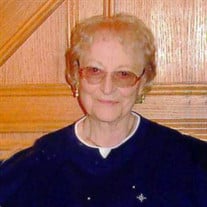 Visitation for Thelma D. Anson age 94 formally of Ewing will be 4:00 p.m. to 7:00 p.m. with family present from 4:00 p.m. to 6:00 p.m. Wednesday, May 26, 2021 at Snider Memorial Funeral Home in Clearwater, Nebraska. A private family service will be held. Burial will be in Ewing City Cemetery. Snider Memorial Funeral Home will be handling the arrangements. Thelma passed away on May 24, 2021 at Alpine Village in Verdigre, Nebraska. Condolences may be directed to the family at www.snidermemorialfh.com In lieu of flowers memorial may be directed to the family for later designation. Thelma Delaine Anson was born on December 4, 1926, in Clearwater, Nebraska. She was the oldest child and only daughter of Charles and Gladys (McCloud) Kruntorad. Thelma attended grade school at District #21 and went on to graduate high school at Wheeler County High School in Bartlett, Nebraska, with the Class of 1944. After graduation she taught school at District #21 for three years. On May 30, 1948, she was united in marriage to Vance Anson in O’Neill, Nebraska. The couple lived in Neligh, Nebraska for a few years before making their permanent home in Ewing, Nebraska. The couple had two sons, Dennis and Terry. Thelma’s life was dedicated to her husband and her family. Along with raising her boys, she spent countless hours alongside Vance while he was in and out of the VA hospitals until his death in 1993. She then could be found helping “Denny” cook and clean at Southfork Bar or spending time with her grandchildren and great grandchildren. She enjoyed sewing, gardening, cooking, and baking and often shared her “goodies” with family and friends. Thelma is survived by her son, Terry and his wife Rita Anson of Ewing; three grandchildren, Seth (Kelly) Anson, John Anson, and Kim Anson; and seven great grandchildren, Belle, Jett, Meg Anson, Hunter and Emma Smith, and Tessa Janek and Karnie Becker. She is preceded in death by her husband, brother Wayne and sister-in-law, Marilyn Kruntorad, and her son, Dennis.

The family of Thelma Delaine Anson created this Life Tributes page to make it easy to share your memories.

Visitation for Thelma D. Anson age 94 formally of Ewing will...