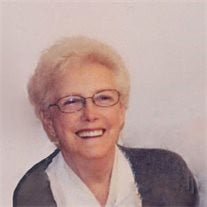 Funeral services for Thelma Rix age 86 of Clearwater, Ne were at 10:30 a.m., Monday, May 20, 2013 at Concordia Lutheran Church in Clearwater with Pastor Daniel Feusse. Music was provided by Caroline Jaeke, Organist and Bob and Rita Kester. Burial was in the Clearwater Cemetery. Pallbearers were Andy Ahlers, Ryan Ahlers, Wayne Ahlers, Brett Rix, Mat McMullen, and Tyler Hubert. Visitation was from 4:00 to 8:00 p.m., Sunday, May 19, 2013 at Snider Memorial Funeral Home in Clearwater. Thelma passed away Wednesday, May 15, 2013 at St. Josephs Rehabilitation & Care Center. Thelma Grace Rix was born on December 5, 1926 to Jacob and Hulda (Hamann) Mackeprang in Bloomfield, NE. She graduated from Irvington High School with the class of 1944. On October 23, 1948 she was united in marriage to John Rix at Zion Lutheran Church in Bennington, NE to this marriage this they had 4 children. She worked at Gate City Steel in Omaha. They moved to Clearwater in 1960, at that time she went to work as a secretary at the Clearwater Public School for the superintendant for 13 years. She was a member of the Concordia Lutheran Church and Clearwater American Legion Auxiliary #267. She liked being involved with her numerous extension and card clubs. Thelma enjoyed painting, her crafts, and spending time with her family. She is survived by her husband. Son, Steve Rix of Clearwater, NE. Daughters, Sandy and husband Michael McMullen of Tekamah, NE and Kathy and husband Steve Ahlers of Clearwater, NE. 8 grandchildren and 19 great grandchildren. 1 Sister-in-law, Marsha Schmeling of Tucson, AZ. 1 brother-in-law, Bill Plugge, Kennard, NE. Numerous nieces and nephews. Preceded in death by her parents. Siblings, Margaret Plugge, Agnes Sass, Duane Mackeprang , Carl Mackeprang. 1 son in infancy and 1 great granddaughter. Condolences may reach the family at www.snidermemorialfh.com

Funeral services for Thelma Rix age 86 of Clearwater, Ne were at 10:30 a.m., Monday, May 20, 2013 at Concordia Lutheran Church in Clearwater with Pastor Daniel Feusse. Music was provided by Caroline Jaeke, Organist and Bob and Rita Kester.... View Obituary & Service Information

The family of Thelma Grace Rix created this Life Tributes page to make it easy to share your memories.

Funeral services for Thelma Rix age 86 of Clearwater, Ne were...

Send flowers to the Grace family.