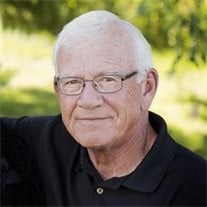 Funeral Services for Steven L. Jessen age 68, of Neligh, Ne were 10:30 am Saturday, January 2, 2016 at Grace Lutheran Church in Neligh, with Pastor Kuhfal, Officiating. Music was provided by Jill Bates, Painist and Janelle Suhr, Soloist. Burial was in St. John's Lutheran Cemetery in Battle Creek. Pallbearers were Brian Christiansen, Henry Aschoff, Gary Davis, Ron Brandl, Kent Tegeler, Doug Ketelsen, Randall Carlson, and George Loofe. Honorary Pallbearers were Jim Jessen, Dave Jessen, and Tom Tegeler. Visitation was 4:00 to 7:00 Friday, January 1, 2016 at Beyer Snider Memorial Funeral Home in Neligh with a 7:00 pm Celebration of Life Service. Steve passed away December 30, 2015 in Omaha, NE. Beyer Snider Memorial Funeral Home is handling arrangements. Steven L. Jessen was born on October 28, 1947, in Council Bluffs, IA, to Neil and Fern (Gardner) Jessen. He attended school at Tri Center in Neola, IA. He graduated from Wayne State College with a Bachelor's Degree in Education in 1970. He entered into the United States Army on September 28, 1970, in Pottawattamie, IA. On April 27, 1971, he was united in marriage to Carol Tegeler in Anchorage, AK, while serving his military duty. He was honorably discharged from the United States Army in St. Louis, MO, on April 5, 1972. After his time in the service, he obtained his Master's of Science Degree in school counseling in 1979. He started his career by teaching Kindergarten – 8th grade in a rural school in Madison County for one year. Steve, Carol, and family moved to Osmond where he taught, coached, and served as the K-12 school counselor for 20 years before moving to Neligh in August 1992. There, he was the Neligh-Oakdale School Counselor for 19 years. Along with being an educator, he coached volleyball for 26 years and wrestling for 31 years. He received the Nebraska Scholastic Wresting Coaches Association's McIntyre/Wattnem Memorial Coaching award after being nominated by one of his former Osmond wrestlers. This award honors coaches who touch the lives of students in a unique and dynamic way. Steve enjoyed hunting, fishing, boating, golfing, baseball, and fast pitch softball. He took pride in everything he did and paid meticulous attention to detail, which was reflected by the standard of every job he completed. His core values included family, faith, and service to others. He was a member of the Neligh American Legion Post #172/ VFW and the Lions Club. Steve was a Board Member for the TeamMates Mentoring Program, Antelope Country Club, and the City of Neligh's Board of Adjustments. He was a member of Grace Lutheran Church in Neligh, where he served as an elder. He is survived by his wife, Carol; children, Stacy (Neil) Kerr of Hastings, NE, Jamie (Wayne) Kreikemeier of Lincoln, NE, Jessica (Matt) Karo of Stuart, NE, and Jon (Hannah) Jessen of O'Neill, NE; 12 grandchildren, Sydney, Tyson, and Nathan Kerr, Abigail, Quinten, Daisey, and Collin Kreikemeier, Addison, Max, and Samantha Karo, Nolan and Isabelle Jessen; brothers, Jim (Ida) Jessen of Omaha, NE, and Dave (Connie) Jessen of Ottawa, KS; many nieces and nephews; colleagues; students; and athletes.

The family of Steven Jessen created this Life Tributes page to make it easy to share your memories.

Send flowers to the Jessen family.